Irish High Court confirms that failure to comply with any condition precedent in an insurance policy is a ground for declinature.

In a recent case the High Court has held that an Insurer may repudiate an insurance policy for failure to comply with a condition precedent even in situations where the failure to comply with the condition precedent has in no way contributed to the cause of the loss. Where an Insurer seeks to decline cover based on the breach of a condition then the Insurer must provide sufficient evidence of that non-compliance.

The Plaintiff building company had taken out a policy of insurance with the Defendant which related to the Plaintiff and its employees or agents. Condition 7(a) of the policy read ‘The following must be kept available for immediate use near the scene of operations; (a) Suitable and fully charged fire extinguishers’.

In October 2008 Mr. Brian Feeney was engaged by the Plaintiff as a subcontractor to line the gully of a roof at NUI Maynooth. Before commencing the works on 26 November 2008 he received an ABC fire extinguisher from the Plaintiff. He also received a Hot Works Permit from the Health & Safety Officer at NUI Maynooth which required a fire watch to be in place throughout the completion of the works. This permit was required on a daily basis.

The sub-contractor did not did not obtain a Hot Works Permit on one of the days that he was carrying out works. When he began preparing pieces of felt to seal a gully in the roof area he smelled smoke and then observed smoke coming from underneath slates on the roof. A fire was then discovered which had progressed 2.5 metres up the roof beams and a smaller fire on the concrete floor. When the sub-contractor attempted to use the ABC extinguisher which had been provided to him by the Plaintiff it failed to work. He then called on some people to call a fire brigade. At this point another CO2 fire extinguisher was handed to the sub-contractor which also did not work. The fire led to extensive damage to the building.

After an inspection of the property is was agreed by the various parties that the cause of the fire was the works carried out by the sub-contractor. The forensic fire investigator concluded that the hot works permit required that there be two people on fire watch and that this requirement had not been complied with. It was agreed by the experts that by the time the sub-contractor had located the seats of the fire it was incapable of being controlled by a fire extinguisher. In July 2009 the Defendant issued a letter of declinature to the Plaintiff based on a breach of condition 7 (a) of the policy of insurance. In the current case the Plaintiff challenged this decision and sought specific performance of the contract of insurance.

Based on the expert evidence the Plaintiff submitted that any extinguisher whether correctly functioning or not would not have been of any assistance to the sub-contractor by the time the fire was discovered and the issue of presence or absence of an extinguisher was therefore irrelevant in that it would not have had any bearing on the loss that was incurred. Ms. Justice Murphy agreed with the Defendant on this point. She held that a condition precedent is one which must be complied with before the contractual obligation to indemnify takes place and that “whether the compliance or non compliance leads to or affects in any way the event which gives rise to the requirement for indemnity is irrelevant.”.

Once established that the Defendant was entitled to decline to indemnify the Plaintiff due to a failure to comply with any condition precedent the Court then proceeded to address the question of whether a condition had in fact been breached.

On considering the evidence of the experts the Court agreed with the Defendant that the most likely cause of the failure of the extinguisher to activate was the loss of the expellant case. Ms. Justice Murphy noted that the Court had heard no evidence to rebut or displace that finding. While the Plaintiff had suggested that there were many other possible reasons for the failure of the fire extinguishers to work no evidence to support any of these hypotheses had been produced to the Court. The Court therefore dismissed the Plaintiff’s claim for specific performance.

This decision confirms the position that cover may be declined once a condition precedent of the contract of Insurance has been breached. This is the case despite the fact that the breach may not have contributed to the loss incurred. This position has been confirmed in the English Courts on various occasions but has rarely been dealt with in this jurisdiction. Insurers should be aware that the onus of proof rests on the Insurer to show that there was a breach of the relevant condition. 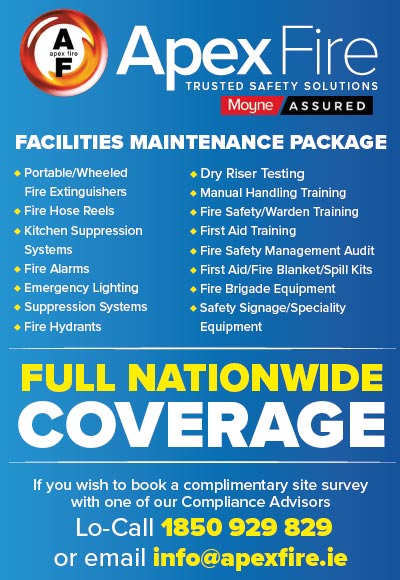 Apex Fire has worked with Ben Dunne Gyms for 4 years in all of our locations. I would like to commend the company of the level of service and exceptional professionalism that its employees exert while performing work in our buildings. I can highly recommend Apex in all aspects, from the relationship with our account manager to the excellent service we receive from Dave and Tony on the ground.

Apex Fire Limited have worked with Care Choice over the past 9 years to develop and deliver customised fire safety training to staff in all of our residential care facilities. They also inspect and maintain all our portable Fire Safety Equipment in accordance with Irish Standard IS291. I have always found Apex Fire team to be extremely professional, proactive and reliable. I can confidently recommend their services.

This website uses cookies to improve your experience while you navigate through the website. Out of these, the cookies that are categorized as necessary are stored on your browser as they are essential for the working of basic functionalities of the website. We also use third-party cookies that help us analyze and understand how you use this website. These cookies will be stored in your browser only with your consent. You also have the option to opt-out of these cookies. But opting out of some of these cookies may affect your browsing experience.
Necessary Always Enabled

Any cookies that may not be particularly necessary for the website to function and is used specifically to collect user personal data via analytics, ads, other embedded contents are termed as non-necessary cookies. It is mandatory to procure user consent prior to running these cookies on your website.