On the 16th October 2019 Declan received a “NSAI 1997 award” in recognition of his valuable contribution to the development in Fire Safety Standards work with the National Standards Authority of Ireland and also with CEN TC 70 the European committee for standardization development where he works on numerous committees as a delegate and chairperson developing new and revising existing standards in the area of manual fire- fighting equipment since 2008. 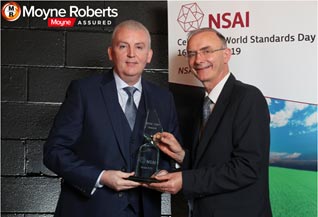 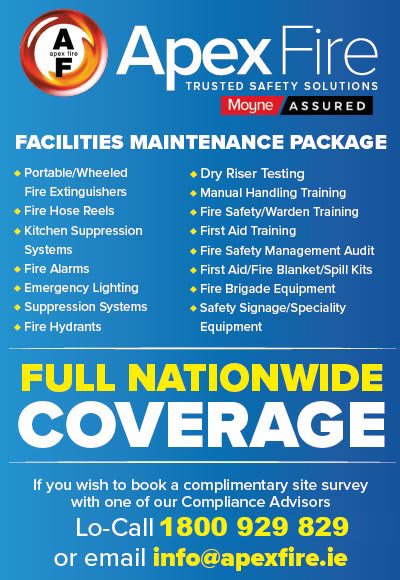 Apex Fire has worked with Ben Dunne Gyms for 4 years in all of our locations. I would like to commend the company of the level of service and exceptional professionalism that its employees exert while performing work in our buildings. I can highly recommend Apex in all aspects, from the relationship with our account manager to the excellent service we receive from Dave and Tony on the ground.

Apex Fire Limited have worked with Care Choice over the past 9 years to develop and deliver customised fire safety training to staff in all of our residential care facilities. They also inspect and maintain all our portable Fire Safety Equipment in accordance with Irish Standard IS291. I have always found Apex Fire team to be extremely professional, proactive and reliable. I can confidently recommend their services.

This website uses cookies to improve your experience while you navigate through the website. Out of these, the cookies that are categorized as necessary are stored on your browser as they are essential for the working of basic functionalities of the website. We also use third-party cookies that help us analyze and understand how you use this website. These cookies will be stored in your browser only with your consent. You also have the option to opt-out of these cookies. But opting out of some of these cookies may affect your browsing experience.
Necessary Always Enabled
Necessary cookies are absolutely essential for the website to function properly. This category only includes cookies that ensures basic functionalities and security features of the website. These cookies do not store any personal information.
Non-necessary
Any cookies that may not be particularly necessary for the website to function and is used specifically to collect user personal data via analytics, ads, other embedded contents are termed as non-necessary cookies. It is mandatory to procure user consent prior to running these cookies on your website.
SAVE & ACCEPT